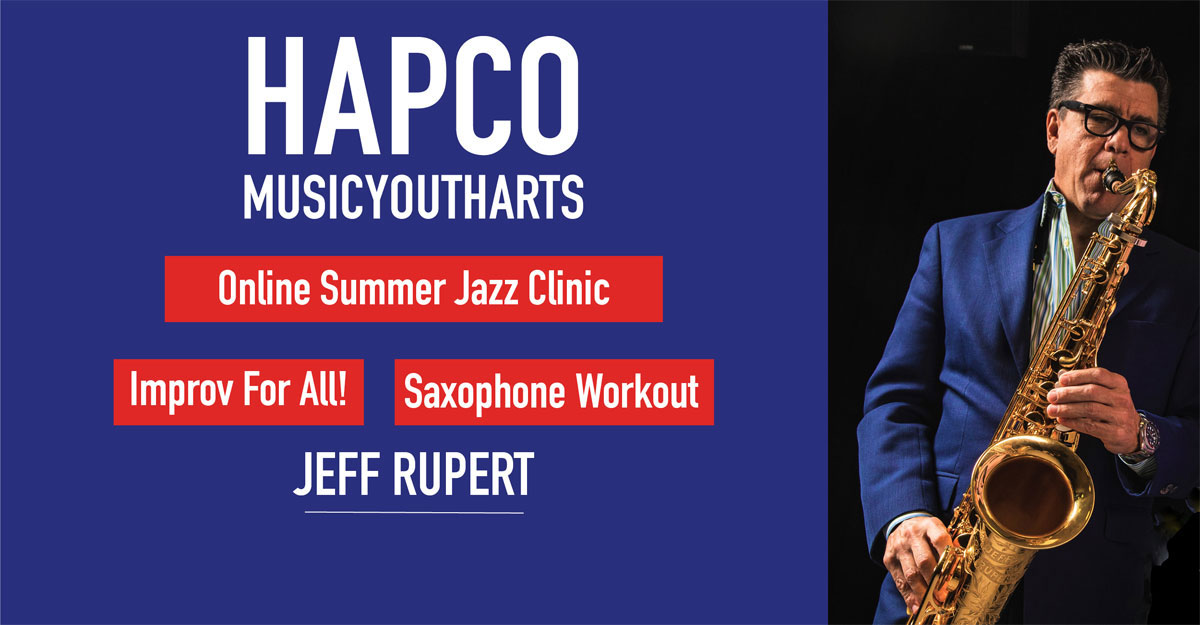 Join Jeff Rupert for three days of jazz jams, improv and education at our Summer Jazz Clinic. You’ll learn how to play improv better and develop an awareness of pertinent recordings and improvisational concepts in jazz. At the saxophone-specific clinic, musicians will develop skills and an understanding of conceptualization of playing the instrument.

Saxophonist Jeff Rupert is a YAMAHA performing artist and founder of Flying Horse Records. He is Pegasus Professor, Trustee Endowed Chair and Director of Jazz Studies at the University of Central Florida.

Jazz Improv for All!
Beginning-intermediate levels
Open to middle and high school students

A non-threatening environment to learn:

Jazz Improv for All!

Advanced level
Open to high school and college students
A fun time for students who are playing and improvising in jazz. In-depth study of improvisation and the music of Charlie Parker, Hank Mobley, Sonny Stitt, Dexter Gordon and more.

(This will be geared to saxophonists who know the basics of the horn, and up. For younger players, they may not be able to play everything discussed, but would at the end would have a packet to work on throughout the summer and year).

For sax players wanting to enhance their skills on the instrument. Study of sound conception, and general saxophone technique.

Saxophonist Jeff Rupert is a YAMAHA performing artist and founder of Flying Horse Records. He is Pegasus Professor, Trustee Endowed Chair and Director of Jazz Studies at the University of Central Florida.

In 2020, The Ripple was released, with music exploring the wide range or ripple effect of Lester Young. Musicians on the album are Jeff Rupert, George Garzone, Marty Morell, Richard Drexler and Jeremy Allen. He has produced four big band albums for the Flying Horse Big Band, all featuring original compositions and arrangements.

He toured for 15 years with Sam Rivers; four albums ensued, and from 1997-2002 he toured and recorded with Maynard Ferguson. His six recordings as a leader all charted on Jazz Week. Do That Again! was #39 out of the top 100 jazz albums of 2014, and En Plein Air: The Jazz Professors play Monet charted on Jazz Week to #29. Rupert’s Imagination, a collaboration with pianist Richard Drexler, debuted at #16 on the CMJ and RMR jazz charts. As a composer and arranger, Rupert has written for Bob Berg, James Moody, Maynard Ferguson, Kenny Drew Jr., Kevin Mahogany and Judy Carmichael.